After seeing a few friends post photos from here, and the article in the paper, we finally made some time to check out Grizzly City Pizza.  We went after 6 to avoid paying for parking, but I wouldn't let that stop me from going any other time.  It was a Friday night, and they had a pretty decent crowd, with most tables full.

For dinner, we chose to order the Spinach & Artichoke mozzarella sticks and did the build your own pizza option - although we were super basic and just had pepperoni.  I'll check out one of the specialty options on another trip.  Both items were pretty good tasting.  Honestly, the pizza looked better than anything you'll get at most Me & Ed's in town.  We were pretty happy with the taste as well.  The crust was sort of bread-y, but in a good way.  It was in between a thin crust and the average crust pizza.  Good taste, not too chewy.  The cheese was a good blend, pepperoni normal, but yes, like most pepperoni pizzas it was a bit greasy.  Whatever.  The mozzarella sticks were pretty nice.  I liked the variation of them being spinach & artichoke. That really balanced out the flavor, and kept it from getting all solid and gross like mozzarella sticks can get when they cool off a bit.

The place has a few drawbacks, and I would guess some of it has to do with them being fairly new.  It took a half hour for the pizza to come out, which seems a bit long.  Also, the mozzarella sticks came out at the same time and I would have loved to have them before, as an appetizer.  Last thing, it was quiet in there - no music or anything.  There was a tv on, and it wasn't super loud, which was nice, but it could have used a little atmosphere noise.  None of these complaints were that major to us, but I could see how some people could really get bent out of shape, especially the wait.

Overall, I look forward to going back and think it's a nice addition to downtown. 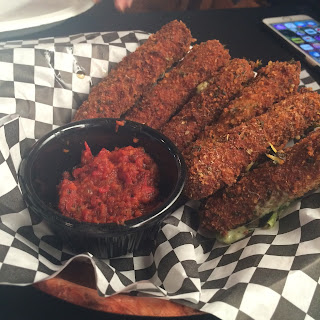 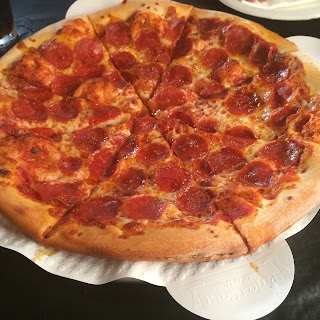