the food truck scene in fresno is growing, and that's nice.  one of the newer trucks has taken a spot in my heart, err... stomach... something like that.  tako korean bbq truck is becoming a regular visit for me.  and like a lot of the new wave of food trucks, they're on twitter and tweet out their locations, although they frequent the same regular spots, so you probably can figure out where they'll be each week.

i first tried their burrito, and liked the mix of korean spices, flavors and such.  it was like your average taco truck burrito in size, but that spice and sauce was great.  next time i tried their philly. it was good, but wasn't my favorite.  i went back for the burrito and eventually made my way to their korta, which is a korean style torta.  that thing is amazing.  they use great bread, which really does matter.  awesome meat on great bread makes a good sandwich.  and, it's rather filling.  i like the sandwich and the food enough that i've been back for it the last two fridays in a row, when they're at the manchester mall farmer's market.  i've even tried their spicy spam taco.

today, they had a takodog on their menu - a 1/4lb hebrew national dog, grilled, served with their bulgogi beef and cheese.  as soon as i saw that, i knew i would be eating it.  and, i had the korta as well, because i'm a big boy.  6 hours later, i'm still full. 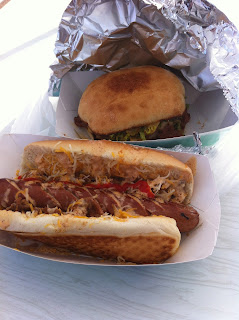 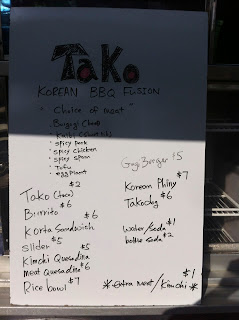 fellowship of the ringwraiths

yes, it's about LOTR and not the hobbit, but still, it'll help us get ready for the hobbit.