"The Mallard, Strawberry Jam, Ornery Ones were fantastic last night! The Mallard sounds super cool as a four piece!" - Luke Giffen, via facebook


last night i went out to see the mallard play at audie's olympic.  fortunately, heather is on vacation so she was able to go as well.  i like the mallard, and really like them live.  for those that don't know, the lead singer of the mallard is greer, formerly of rademacher, but it's a much, much different sound than the old days of rad.  i dig it.  the first time i saw the mallard it was a two piece. then, heather and i saw them as a three piece. now, it's a four piece and sounds really good.  the music is more densely constructed, but still has a very light, energetic and loud feel to it.

the first band of the night was a project featuring james brittain gore on guitar & singing, benji mcentee (of the fay rays) on bass, and another guy on drums.  they had a nice sound, but it didn't blow me away.

the second band of the night was strawberry jam.  i'd never heard of them, but they're from the area.  and they freakin rock.  both heather & i were astonished by the bass player especially.  she laid down some seriously good bass lines on the night.  i shot two videos of them to share with the world:

finally, the mallard was up.  i could see them over and over.  the energy.  the talent.  the awesome noise.  the videos don't do them justice.


so, i'd agree with luke.  awesome show last night.
Posted by edluv at 1:46 PM No comments: 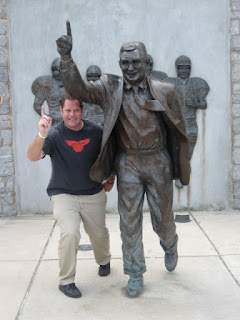 this weekend this famous statue was removed.  and it should have been.

some would say that joe paterno was a great coach, and we should honor his accomplishments.  the statue should stay.  while i understand the sentiment, and agree that he was a great football coach, we can not deny what he also did: cover up a horrendous crime.

joe paterno tarnished his own legacy.  he could have done things differently.  he could have reported his dear friend to the police as soon as he was aware.  he could have made sure that a great university would not be brought down by such a heinous scandal.  i realize paterno was not alone in this.  everyone complicit in this scenario should be brought to light.

but football is not as important as life.  football, wins, and paterno are not as important as those children's lives that were ruined.  i know there are many that still would love to worship at the altar of paterno, but they should not.  and the university needed to take down the statue as a way of closing the door on that part of their history.  as long as that statue remained it would be a reminder of the shame paterno brought on himself and the university.

btw, the photo above is me in 2008. i visited happy valley on our way to a friend's bachelor party.  i respected paterno as a coach, even though i wasn't a penn state fan or from the area.  i thought it would be cool to take a picture with the statue.  here's another one i took: 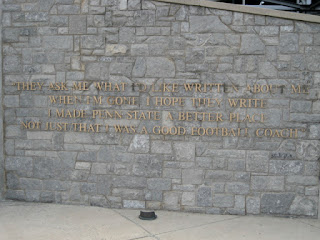 in case you can't make out the words, it says "they ask me what i what i'd like written about me when i'm gone. i hope the write i made penn state a better place not just that i was a good football coach."

sadly, that's not what is being written any more.
Posted by edluv at 4:10 PM No comments:

it's restaurant week in fresno. that means a lot of local restaurants have fixed price menus going, and you all should get out and try some place new.  you don't have to go to one of the participating restaurant, but you should go to something local and new to you, in my opinion.  for us, the stars aligned and we decided to go to lela's.

you see, the other night i was talking to nolan, a guy i've talked to a few times before, but i wouldn't say i know him really well.  i know him, he knows me, in the sense of we've got some shared friends, we've chatted at bars, and we'd definitely say hi to each other in passing.  well, the other day we ran into each other and he told me all about the new ventures in his life.  he had been cooking in restaurants, but has stopped, and is now a part of tower urban family farm.  he and his brothers have converted some property around one (maybe more) of their houses into farm, and are growing vegetables.  they're selling it every weekend from the urban farm.  they're also in the process of getting certified as a farm, something that's a little tricky when you're in the city limits.  once they are certified, nolan felt they could really be sustainable as a business because they could sell more openly to restaurants and such.  in fact, he said he had at least two places that specifically will be using their vegetables as soon as they are certified, but aren't able to take the risk before.  one place that is willing to go out on a limb is lela's.

lela's is out at herndon and marks, which is pretty far out there for us.  it's not that we won't go to different parts of town for food or entertainment, but this is any area of town that we don't spend much time in.  lela's is tucked away in a less than scenic shopping center, but that doesn't really matter for the dining experience once you're inside.  the decor is nice and clean, fairly modern and there's a window that allows you to see the chefs at work.  they have a few booths and mostly tables.  i'd guess the place seats around 50 to 60 people.

the menu is standard american cuisine, and i don't say that in any sort of pejorative manner.  in a recent fresno bee article it was referred to as lighter, traditional fare.  for starters, we had the cheese & fruit plate and the crab cakes.  my wife really enjoyed the cheeses. (admittedly, we love cheese, and will get cheese plate appetizers at a lot of restaurants. if it's on the menu, we'll probably order one.) i had the crab cakes, which were a dungeneus crab mix, coated in panko. they're served on a bed of greens with a light sauce.  they were amazing.  you get 3, i could have foolishly eaten like 30.  maybe that's just me.  for our mains, we ordered the grilled salmon and the ribeye.  the salmon comes with quinoa, which had a texture like maybe it had been fried a little, and that was pretty nice. it also had a nice sweetness to it.  my wife said if quinoa was always like this she would love it.  it also comes with some root vegetables and arugula.  the salmon was well prepared, but overall was pretty normal.  the ribeye comes portabella mushroom potato croquet, spinach and asparagus.  i liked the veggies, but whatever, i was focused on the ribeye.  the ribeye was everything i expected: tender, juicy, flavorful. it had a simple seasoning to it, which allowed the meat flavor to stand out on it's own.  yes, there is a glaze that went over the food, but it added to the flavor and didn't dominate the plate.  i was also pleased that the ribeye was trimmed of most of the fat but still had a little on the edge along with the juicy amounts in the cut.  honestly, sometimes at restaurants you get a ribeye that has a crazy amount of fat and can be a bit overwhelming.  for dessert, we had the new york cheesecake which was good, and their take on the drumstick - the deconstructed drumstick, which is a scoop of ice cream with a waffle cone peace on it, chocolate sauce w/peanuts and some cashews.  both desserts were good, but we were pretty full from our meal and neither of us finished dessert (again, we were just full, both tasted good).

as for the staff, we found our waiter very nice.  he and the other staff seemed pretty knowledgeable and willing to serve.  it seems strange to say that about wait staff, but sometimes they just want to talk your ear off, or aren't around.  we were checked on a reasonable amount of times, and the waiter actually asked my opinion on how they do their coffee - they bring out a french press to your table.  i was honest, and said it was alright but not great.  i liked the presentation of it, but the coffee itself wasn't that great, and with french pressed coffee it always seems a bit silty.  it was also nice that the executive chef come out and was checking on patrons, and stopped by.  i wanted to ask him some questions, but was busy with my ribeye when he came to our table.

overall, we had a very nice experience, would recommend lela's to other's, and would go back again.

btw, i recommend reservations, and the dress seems like dress casual.
Posted by edluv at 1:08 PM 2 comments: