want to be depressed and feel like most americans, aka the working poor? check out playspent.org and try to make it through a month on what many americans are "living" on.
Posted by edluv at 8:19 PM 2 comments:

Email ThisBlogThis!Share to TwitterShare to FacebookShare to Pinterest
Labels: sociology

yep, i'm double posting this. because i love the podcast, benji mcentee, and the rogue festival that much. listen and enjoy!

Yessir, we're back with another episode of goodness. Today, we talked to Benji McEntee from the Rhoda Penmarks about their upcoming Rogue show.

In this episode we talk about:
what the Rhoda Penmarks do with movies
how to score a show
what makes a good band name
the Rogue in general
best Radiohead album

and a whole lot of other randomness. This episode runs about 90 minutes, so we hope you enjoy.

As always, this episode contains some salty language, so don't play it on your stereo around your grandmother. And, if we have any Mormon listeners, we're sorry in advance.
Posted by edluv at 4:16 PM No comments:

so, the rogue festival is right around the corner. this year will be a different experience for me, as i've shown visual arts pieces for the last several years. (and, i've sold pieces during the last few years.)

after co-coordinating the visual arts venue with adam last year, i realized that i definitely didn't want to do that again, and also i kinda was leaning towards less participation in the rogue. i don't have anything against it, just a little fatigue on my part. so, when application time rolled around, i decided against it. instead, i'm going to just do my part as a supporter. i also may volunteer at the door for a few events.

something i've noticed, or haven't noticed, is rogue promotion. i've seen a little buzz, mostly a few tweets or facebook updates, but i haven't seen the full court press yet for the rogue. either it's not happening, or i'm not connecting with the right spots to see it. either way, that disappoints me because this should be a big year for the rogue. it's the 10th year, and i know they had hopes of doing it better and better this year. i hope there is more promo stuff going on than i realize.

i'm sure there will be good shows this year. i know that some talented past performers like travis sheridan, jaime holt, josh tehee (i think) have stuff in the mix. and, the rhoda penmarks are doing another movie soundtrack. this year is dr. jekyl & mr. hide set to their own original soundtrack. we're trying to book some of the band on the podcast to talk about the show soon. and i'm sure there are many other great acts to be seen.

so, what should we do? i (we?) can sit around and complain that we haven't seen enough rogue promo stuff. and right or wrong, nothing changes. or, we can click on over to the rogue site (link above) and start reading show descriptions, looking @ show times, and plotting our rogue experience.
Posted by edluv at 11:20 PM 6 comments:

andy dick was on
american dad, living
in roger's attic
Posted by edluv at 8:20 AM No comments:

so, i actually watched the grammys last night, which wasn't a first, but it's not something i usually do. and, i also participated in some live commenting over @ the beehive, which made it a little more fun.

i watch awards show occasionally, so i understand that they're always a little lame and overdone, and this one fit right in with that. i also understand that there will be wins and losses that people are upset about. shoot, i remember being a young metalhead and feeling that metallica was robbed of the first ever metal grammy. shoot, i still feel that way. but, whatever, it happens.

here are some of my reactions on the night:
- like most, i hadn't heard of the winnner of best new artist. that's okay, she does jazz, and so i'll check her out. i'm not surprised i don't know her, she is doing something different. i do appreciate that she is a trained musician, and doesn't seem to be a part of the mainstream machine. she's not the latest pop princess, prefab regurgitated pablum. that excites me, even if i don't know her music.
- enjoyed most of the collaborative musical pieces. shoot, that cover of dolly parton's jolene was one of my favorite moments of the night. just great sounding. and i thought the grammy's did a good job of putting those moments together last night.
- arcade fire. not everyone likes them, and that's fine. i do like them, and i was surprised they won. was it the album of the year? i don't know, but honestly, i think it's a good album. i'm not just saying that as a fan of theirs. it does make me chuckle that kanye's rated 10 album didn't even get nominated, let alone win. and for all those people that are up in arms (or tweets) over arcade fire winning, settle down. if you've never heard of the band, that's on you. they've been on saturday night live twice, and been on most of the late night shows. they've released three successful albums, and the latest did sell rather well. in fact, it debuted on the billboard charts at number 1. so, if you've never heard of arcade fire, that's on you. be more aware of the culture around you because it's not like they're some fringe band. that doesn't mean you have to like them or agree with the grammys, just don't be some knee jerk 'i don't know who they are' type.
- presenters: mixed reactions to the presenters last night. some, like puffy, j-lo and marc antony seemed a bit off. don't know what they were doing before coming on stage, but they all seemed a little lost with the teleprompter. maybe a little too happy. and, it looked like puffy had braces. seth rogan was forgettable but i thought jason segal was pretty funny in his little bit, as was neil patrick harris, who had a little wink about his sexuality. as for cbs using several cbs people, i guess that's par for the course.

overall, the show was interesting, but it dragged in the last hour, and i don't know if i'd watch next year. i guess we'll see.
Posted by edluv at 11:03 AM No comments:

Email ThisBlogThis!Share to TwitterShare to FacebookShare to Pinterest
Labels: grammy

weather person tricked
me again. surprise rain got
my clothes wet once more.
Posted by edluv at 11:00 AM No comments:

another cool video from the people over @ california is a place. i've enjoyed their great mini docs about scraper bikes, real dolls, the border and so on. this is the latest. uppercut.

Uppercut from California is a place. on Vimeo.

as an enthusiast of the film fight club, i was intrigued by this.
Posted by edluv at 7:46 AM 2 comments:

Email ThisBlogThis!Share to TwitterShare to FacebookShare to Pinterest
Labels: california is a place

loving this dubstep remix of elephants on parade from dumbo.

Email ThisBlogThis!Share to TwitterShare to FacebookShare to Pinterest
Labels: dubstep

looking for things to do in the next few days. well, of course you should hit up pub quiz on wednesday. seriously, if you haven't been yet, why? 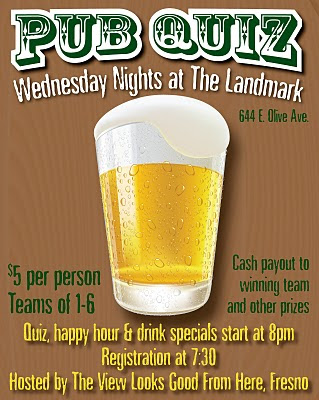 then, thursday night, head on down to fulton 55 and hit up the beehive birthday bash. i've been to a few of these, and they're usually quite a fun time. 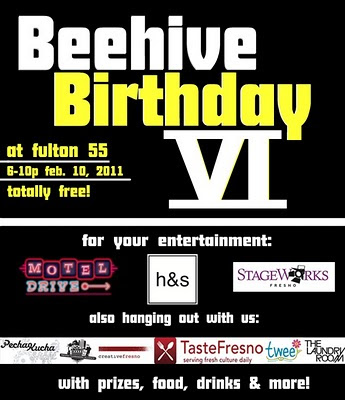 they'll have bands like motel drive, food trucks from la elegante (some of fresno's best tacos) and dusty buns (always delicious), and tons of giveaways. there will be other entertainment as well. i'm also excited that i'll be able to check out fulton 55 for the first time.
Posted by edluv at 6:28 PM No comments:

not a very good
season of big love this time
glad it's the last one
Posted by edluv at 6:12 AM No comments:

i enjoyed watching the super bowl this year with just a few friends. we grubbed, joked, and made a few little wagers amongst ourselves. i must say, i did rather well.

congrats to the packers for holding on to a win in close game. it was very enjoyable to watch.
Posted by edluv at 8:03 PM 1 comment:

everything is a remix

i love educational videos, especially those about music or culture. (remember the amen break?) well here's two about how everything is a remix

Everything is a Remix from Kirby Ferguson on Vimeo.

Everything is a Remix Part 2 from Kirby Ferguson on Vimeo.

can't wait for the final parts. maybe i'll even donate @ some point.

everything is a remix
Posted by edluv at 5:33 PM No comments:

look who's back at making cool flyers for their shows: 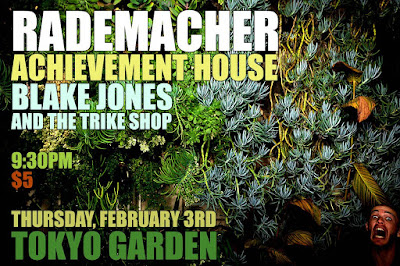 that's right, your favorite, and mine, rademacher. this week's post art hop show sounds like fun. achievement house is getting a lot of local buzz, i think the current rademacher line up is one of their best, and blake jones & the trike shop do some quirky, cool songs.

btw, last week i went over to the quiet show featuring malcolm sosa, niiiiiiiilo smeds, rc, and luke giffen. good show. enjoyed new songs by all those guys.
Posted by edluv at 12:00 AM No comments: